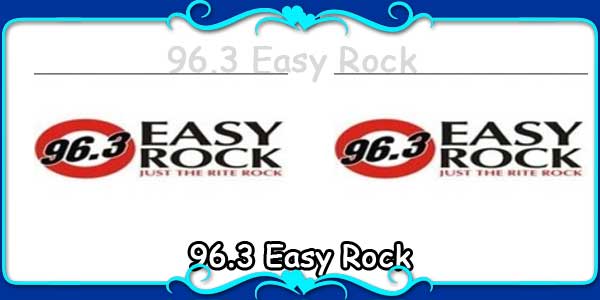 A new sensation and Heart of Philippines “96.3 Easy Rock” makes your day memorable with its vast variety of songs. Infuses energy for your workday and relax your mind and soul when you want it that way. Listen to the wonderful melodious songs of your choice all day long. “96.3 Easy Rock” is fully customized internet radio station which provided you with 100% satisfaction.
96.3 Easy Rock is a music FM radio station owned by ACWS – United Broadcasting Network, Inc. in the Philippines. The station’s studio is located at FEMS Tower 1 along South Superhighway in Manila. The main format of the station is lite rock music. ACWS – United Broadcasting Network, Inc. runs the Metro Manila radio station DWRK, more popularly called 96.3 WRocK, on the FM band, and has been on the air with the lite rock format since 1988. It used to be known as RK 96 Real Radio. WRocK is also playing to radio audiences in Bacolod (DYKR 96.7 MHz), Cebu (DYRK 96.3 MHz) and Davao (DXKR 95.5 MHz). ACWS-UBN runs WRocK Bacolod and Davao while its sister company, Exodus Broadcasting Company, runs WRocK Cebu. On October 6, 2008, it has been announced that the Elizalde Group of Companies’ Manila Broadcasting Company has purchased WRocK from the Hodreal family, owners of ACWS-UBN, for PhP229.6 million. Except for the acquisition price, further terms were not disclosed.